On Wednesday, February 7th, 2018, Mary Kathryn Nagle (COL ‘05) returned to campus to discuss the debut of her new play, Sovereignty. Nagle reflected on her time at Georgetown and how she wanted to be both a lawyer and a playwright. Feeling torn between the two career paths, she told the audience about how she decided to do both.

After graduating from Georgetown, where she performed her thesis, Nagle matriculated to Tulane Law School. During her time there, New Orleans was struck by Hurricane Katrina. Nagle used playwriting as a method to help her classmates process the traumas of the storm. The play was a hit, and she would continue writing plays during her federal clerkship in Oklahoma.

She spoke about how her judge had asked her to highlight a case that was decided at their court. She decided on Standing Bear v. Crook, the case that would eventually lead the Supreme Court to rule that Native Americans are to be viewed as people under the rule of law. To commemorate this case, she wrote a play that would eventually lead to her getting into the New York Public Theater’s Emerging Writer Group.

Since then, Nagle has had great success as both a playwright and lawyer. Also the partner of her own law firm, Nagle’s newest play, Sovereignty, is currently playing at Arena Stage. She told the audience about how a Supreme Court justice had recently come to see the production.

“What better way to make your case to a Supreme Court justice than a play?” she asked.

She concluded the talk urging the students to continue the tradition of theater at Georgetown. She then sat down with Prof. Naomi Mezey and Prof. Ricardo Ortiz to answer questions from the professors and audience.

Asked about how she balances translating the law in her plays, Nagle discussed how she has to decide how best to distill the law for an audience and whether there is too much or too little exposition. This is also something she thinks about outside of playwriting. “Lawyers are storytellers too!” she replied.

Students and faculty members were delighted by Nagle’s talk. Johnny Monday, an undergraduate student, talked about Nagle’s knowledge and expertise: “It is exciting to hear from an alumna both trying to make a difference in the ‘real world’ and using art in that process. Her dedication to righting the wrongs of the legal system both in her career as a lawyer and as a playwright is inspiring.”

Prof. Ricardo Ortiz also found Nagle’s conversation to be provocative and exciting: “Her impressive career demonstrates the genuine good that can happen when a talented, ambitious young person embraces both her creative passion and her public commitments, and finds a professional path that allows her to both honor and integrate the two.”

Sovereignty played at the Arena Stage until Februrary 18th. 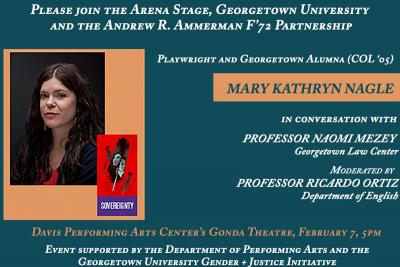 In Dialogue with Mary Kathryn Nagle, playwright of Sovereignty

On Wednesday, February 7, at 5pm, Professor Naomi Mezey (Law Center) will be in conversation with the playwright and Georgetown alumna Mary Kathryn Nagle (COL ’05) whose daring new…